↓
Home Menu ↓
Skip to primary content
Skip to secondary content
Home→Amazon→Is the Seattle boom becoming a bubble–and then a bust?

Get your copy now!

A note to visitors

During the summer of 2016 I relocated from Seattle to Las Vegas. Since then, I have not put up new posts here on New To Seattle, although visitors are free to comment on older posts, to which I often respond. In Sin City I've launched a new blog, New To Las Vegas, which continues my same tradition of observation, musings and commentary. Visitors can access my new blog by clicking here. Please visit and stay awhile. 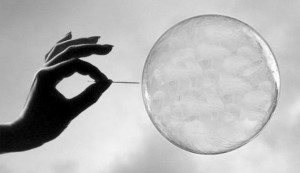 Living half of the 1980s in Houston, I experienced up close and personal that eternally repeating economic pattern long known as the boom-bubble-and-bust. I watched the same cycle living for seven years in the Los Angeles area just before becoming New To Seattle. As a New York City property owner for more than three decades. I’ve experienced a couple of BB&Bs.

I’d say Seattle is well into that ominous pattern. To me, the only question is whether the city is still in the boom phase or already has moved into more risky bubble territory. If so, a bust with its many, many problems might not be too far off.

Home prices have gone up nearly 19% in a year, many times the rate of inflation (Zillow, which happens to be based in Seattle, says my own home has appreciated 37% in less than four years!) A quick drive around the city shows massive new construction under way, all of it, undoubtedly, financed with borrowed money that some day has to be paid back. Much of the downtown action is centered around Amazon.com’s plan to ramp up its estimated 20,000 workforce by building more tall buildings. Apartment complexes are seemingly going up one after another on every major street in town, and not a few of the minor ones, too.

According to the latest U.S. Census estimate, Seattle’s population went up in a single year by 18,000 people to 653,000 folks. That’s a 2.8% increase that gave it the nation’s highest growth rate among big cities.

This also is not too far from the 3%-plus population growth that Houston posted annually in the 1970s and early 1980s amid an epic boom. An epic boom, I should add, that petered out just a few years later when the rising price of oil stalled and then crashed. That took down with it almost every bank and construction company, although it allowed me to buy a repossessed home for about 50% off.

I’m already seeing locally classic signs of foolhardiness. For the past century Seattle’s average annual rate of population growth has been less than 1%. You can look it up. Population in 1910: 237,000. Estimated population in 2013: 652,000. That works out to a long-term compounded rate of 0.99% a year. But rather than look at Seattle’s historic growth rate, or maybe boosting it by half again to 1.5%, planning seems to be taking place by starting with that 2.8% number–nearly triple the historic  rate to start with–and then projecting upward out for a number of years.

History in other places has shown this leads to a lot of empty commercial buildings and living units. That’s what betting on the come will do.

The big B word is even being bandied about by others in Seattle. “I’m worried about another bubble,” The Seattle Times recently quoted one real estate broker as saying.

A bubble, by the way, is when assets are bought and sold in large volume for ever-increasing prices far above their intrinsic worth, usually with increasing amounts of borrowed money. It gets its name because, like a real one made out of soapsuds, there isn’t much substance nor does it take much to make it explode–a mere prick, or its economic equivalent, like a widespread realization that things are crazy or a competing technology that threatens the local mainstay. But unlike detonated liquid detergent, the aftermath of an economic bubble can be profound. Behind the boomy run-up is the Greater Fool Theory–the notion that no matter what was paid, someone out there will buy it for more. But in a bust, almost everyone becomes a seller–at a time when there are few buyers.

As I see it, the history of the United States is essentially the history of booms-bubbles-and-busts. Economic roller-coasters have been more the norm than the exception, as American as John Wayne, the Super Bowl and Al Gore. There have been a dozen or so of national ones, and countless local ones. For most of the country’s existence, we have not been more than 10 years from the start or end of a BB&B, or some cousin of sharp economic volatility.

The first big debacle came when the country was only eight years old (if you count the Declaration of Independence as the birthday). A boom and bubble exploded into the bust called the Panic of 1785. Missed that one in your high school history class? It came just two years after the end of the Revolutionary War, surely one of the few world conflicts ever to be waged–with considerable bloodshed–over taxes. I won’t bore you with too many details, except to say that there was increased borrowing followed for all kinds of interesting but predictable reasons by an inability of borrowers to repay their loans. That ruined both borrowers and lenders.

After maybe 10 more recessions, which are sort of minor booms-bubbles-and-busts not rising to the level of a panic, we are now only a few years past the end of the Great Recession, which definitely was the result of a BB&B. This was caused in large part by wild lending for real estate assets not really worth that much.

Not all BB&Bs are national. I mentioned the 1980s episode in oil-rich Houston. In the 1920s Florida experienced much the same pattern in raw real estate, especially when it was discovered that some of the land used as collateral was swamps and one of the salesman was noted scamster Charles Ponzi. While national, the Great Recession hit particularly hand in places reliant on subprime real estate loans to not-so-creditworthy borrowers, like Southern California, Arizona and (again) Florida.

What could prick an impending bubble in Seattle? Growth of a competitor, like China’s Alibaba Group, to Amazon.com, which seems to be responsible for much of Seattle’s economic expansion. A realization that online buying is so prone to hackers and thieves that cash and brick-and-mortar stores are safer. Resistance by newcomers to squeezing into new apartments not much bigger than a large closet. Even a big earthquake, tsunami or something again out of Mount Rainier, long classified as one of the world’s most dangerous volcanoes.

The one saving grace about a bust is that prosperity usually returns. Eventually. After the peak before the stock market crash of 1929, it took 25 years for stocks to get back all their value. That’s a long wait anywhere, but especially in a hurry-up place like Seattle.

This site uses Akismet to reduce spam. Learn how your comment data is processed.

: You are correct that during my lengthy stay in Seattle for 25 yea...
William P. Barrett: nnobrien, I agree with that....
nnobrien: Vereide structured his world-wide work to appeal to “the strong...
William P. Barrett: I wrote that post in 2011 within two months of arriving in Seattl...
Rose Durst: I am new to Seattle too, 2020. I'm a midwesterner. I am constant...
Scott: I used to work as a valet at the Grand Hyatt Seattle — so I loo...
William P. Barrett: Haven't seen much of a purge Fremont movement. Good luck....
Keith Jay Stanton: I live in Fremont, NH. Named after the "General". My mother's f...
William P. Barrett: Have at it. But I won't be able to be a member: I now live in Las...
Carrie: I've always wanted to start a support group for NJ and NYers who ...
Karen: First, in regards to after-Vereide's-time, a ministry of counsell...
: Grubb's book was published way back in 1962, and, as far as I kno...
Karen: That paragraph about the 'spooky' conspiratorial group is a lot o...
: Their asking me for my credit card # over the telephone completel...
Hayk S: I'm glad Bellingham is in the list as my mom decided to retire in...
William P. Barrett: Besides the fact there aren't a lot of 14-digit phone numbers out...
Joy: I live in Kentucky and Joel Collins just called for the Internati...
Dave Casciano: All over the country in the East says he reps the police...
ananomyous: The gentleman that called said he was with the United States Arme...
Kathy: You can donate to the Daughters of he American Revolution in supp...
William P. Barrett: Joel gets around....
Julia Wabo: I JUST got a call from Joel Collins but today he is with the New ...
: I just got a call from this same company with an 804-894-9204 num...
William P. Barrett: Actually, the biggest scandal here is that the NPTA is part of a ...
wes block: I live in NJ, and only found this page when I Googled this suspic...
William P. Barrett: While San Francisco is a physically beautiful town, I haven't spe...
Nicole: Oh God. I don't even know if you read this anymore but paragraphs...
Dan: I live in Virginia, Joel just called me (and generally does once ...
Sandy: Sorry this posted twice. The first time it said it didn't go so d...
Sandy: I received a phone call from these people a week or so ago and fi...
Sandy: I received a call from these people a week or so ago and finally ...
William P. Barrett: The Seven Sisters of Healing are all over the place....
Julie Jarvis: Thanks for your research! My husband pledged a donation after a ...
William P. Barrett: You might consider mailing the charity a copy of my post....
steven archambault: Great info. They've been hounding me for weeks. Being a charitabl...
William P. Barrett: Ah, yes, the Seven Sisters of Healing try to strike again....
Holly: Thank you for your research. Received my pledge notice in the mai...
Saint Pétersbourg: I just received a call from this organization a moment ago. She t...
William P. Barrett: My pleasure....
Happy: Thank you so much for your insight and information. I received t...
Jodi O.: I'm curious to know if they ever take legal action for not donati...
William P. Barrett: If Bob Newhart had started his stand-up career in Seattle, he wou...
Jennet Preston: (continued) In the second story, I didn't actually say anythin...
Jennet Preston: You are right about Seattle! I landed here after NYC, London, and...
William P. Barrett: Few charities are as deceptive as this one....
: I have received several calls from this organization, the most re...
Sheryl Smith: I too rec'd a donation request but instead of mailing my check to...
Jane: I was addressing the envelope now to send in my $20 donation but...
William P. Barrett: The U.S. Armed Forces Association seems to be more active now aft...
catgod12: So nice to have someone else doing the leg work in checking these...